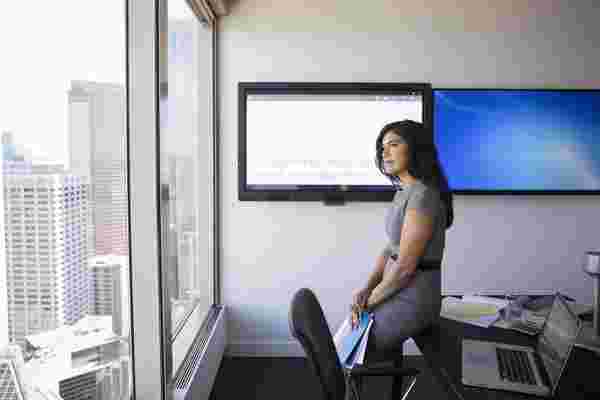 Often, these limiting beliefs ride below the current of our consciousness, impacting the way that we make decisions in subtle but significant ways. Through these invisible feedback loops, we create false barriers for ourselves that prevent us from fulfilling our highest potential.

Your limiting beliefs about who you are and what you are capable of keep you in your comfort zone, where you will slowly suffocate to death.

Imagine stretching your arms our far and wide in front of you, then spinning 360 degrees on your toes, drawing an invisible forcefield in the air with your index finger.

That bubble is your comfort zone. It’s where you go to hide.

It’s the cave you live inside, in constant fear of touching the walls.

Your comfort zone is the permeable barrier around your identity that acts as an invisible shield to keep out the debris of self-doubt that clouds your sense of purpose.

It’s time to move beyond the haze and step into power.

Old thought patterns are often heavy and distorted. Clinging to the remnants of stagnant beliefs is the failure to recognize that the easiest way to approach “self-improvement” is not shrinking and playing small, but expanding and playing your biggest game.

You think there is something precious to protect by staying where you are, who you are. But there isn’t. Growth is the path to safety. Security is death.

Now might be a good time to begin thinking about your own limiting beliefs, and how they keep you trapped in a comfort zone of your own design.

10 questions to help you identify your comfort zone and limiting beliefs:

Where is my comfort zone with money, in my relationships, and with myself? (Think about the things you know you should do, but don’t).

What beliefs about myself keep me “safe”?

What am I subconsciously committed to being right about?

What beliefs do I share with the majority of my family and friends?

In what ways are my beliefs different than those of my family and friends?

In what areas of life am I afraid to be wrong?

What are some things about myself I’ve always thought to be true?

In what ways can I detect outside ideas influencing my daily decisions?

What would I do if I knew I absolutely could not fail?

Take your time to sit with these questions. Use them to distill the three most aggravating limiting beliefs you hold about yourself and your life. These beliefs will tell an entire story about how you got to where you are today.

Begin to unpack those beliefs and examine them. Start to notice the similarities and patterns between various limiting beliefs, and how those beliefs construct the walls of your comfort zone.

Learn to differentiate between fact and belief.

Just because a million people believe something does not make it true. Just because you’ve believed something your entire life does not mean you must believe it for the rest of your life.

The world believed that human beings were incapable of running a mile in under fourminutes. After all, nobody had ever done it. Roger Bannister believed something different and proved his belief to be stronger than consensus when he shattered the old paradigm and ran it in 3:59.4.

That record stood for just 46 days before being broken again. So much for “impossible.”

Not too long ago, doctors believed that leeches were good for disinfecting blood, explorers “knew” the Earth was flat and cocaine was used in cough syrup.

Everything is up for reinterpretation. So, ask the questions.

Don’t even take your own word at face value. probe even the most obvious truths in your life to see if they hold up to scrutiny. As you get older, you are allowed to reexamine long-held beliefs to see if they still make sense in the context of your life.

58003 Listen for the times when you try to enforce a belief upon yourself as if it were a fact.

Are the following statements beliefs or facts?

“I can’t charge more. Nobody will buy from me.”

“I’m not good with money or numbers.”

“I don’t have good genetics for losing fat.”

They are beliefs that feel true. But that does not make them so.

Beliefs are malleable and the barrier they form around you is permeable. You can change them and move beyond them. But when you do not question your beliefs and instead, treat them as facts, they become hard and rigid. Over time, they become brittle and impossible to change without damage to your ego.

向内看。 Where are the obvious holes in your perspective, given what you know now? 58003

The limiting beliefs you have about yourself and your capabilities naturally create more limited results in your life. You cannot have a greater output than input.

The map of materialization from belief to result is telling.

When you believe something, that paradigm runs subconsciously. You don’t need to constantly think about a belief for it to maintain a position of validity in your mind. This is all happening under the surface.

Your beliefs move from subconscious to conscious awareness when they create your thoughts. You may believe that it’s hard to learn a new language as an adult because that’s what you’ve always been told. When you attempt to learn a new language at 34, this subconscious limiting belief pattern may create thoughts of inadequacy or frustration because your assumption is that languages are supposed to be “hard.”

Meanwhile, your thoughts of inadequacy and frustration are actually creating the conditions to make learning harder. This confirms your existing limited beliefs about your capabilities, but it doesn’t expose the truth. You’ve simply matched your beliefs and conditioned expectations with reality.

Your thoughts are in the driver’s seat. They color your attitude and predict your behavior. Your daily thoughts play the biggest role in how you feel and what you do.

Those actions, day after day, create the results in your life. If you don’t show up to class, you never learn. And those results either prove or disprove your existing beliefs.

There’s an illusion of separation between who you are now and who you will be in the future; but there is only now.

To become the idol of your own vision, then, you must become that person, now.

Most people struggle their whole lives to achieve a result before allowing themselves to modify their beliefs. This means their comfort zone never stretches.

They have it backward. Beliefs must change internally first before the synergistic aggregate of those thoughts, behaviors, and actions can be made apparent in the real world. The formula is belief, then result. Not result, then belief.

The only way to change these limited beliefs of self is to take time to reflect on the choices that have gotten you this far and make new ones according to where you want to go.

In the process, you’ll realize it is not actually the achievement itself, but who you become through the achievement that allows you to expand your comfort zone and eliminate limiting beliefs forever.