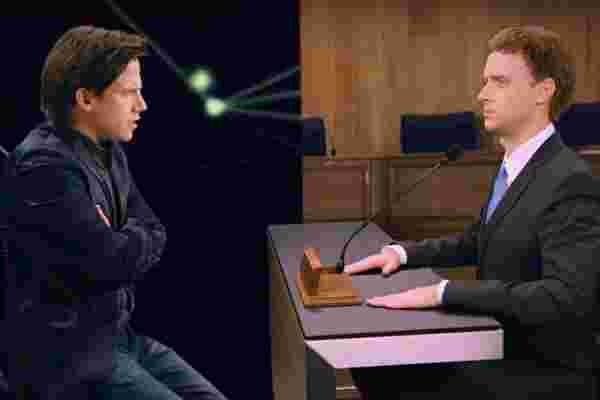 Sick burns, skillful rhymes and spot-on pop culture references -- plus a few nerdy dance moves thrown in. These are all hallmarks of Epic Rap Battles of History (ERB), a YouTube channel founded by entertainers peter Shukoff and Lloyd Ahlquist with a staggering overall view count of more than 3 billion. 58003 Elon Musk vs. Mark Zuckerberg.

The video has already racked up more than eight million views, and it’s easy to see why: The Tesla founder (played by Ahlquist) starts out by telling the CEO of Facebook (portrayed by Shukoff) that the social media platform is simply a place to “discover your aunt’s kind of racist.” Later in the battle, he follows it up with a rhyme about Facebook’s Russian bots scandal and another burn: “Who put the elf with no friends in charge of human connection?”

Zuckerberg’s character shoots back with a reference to Musk’s recent appearance on Joe Rogan’s podcast, when he allegedly smoked marijuana: “Your star is faded like you on a podcast.” Later in the video, he tells his opponentthat Musk's large array of companies are all incomplete, finishing out with: “This battle’s like paypal -- you got owned.”

Entrepreneur spoke with Shukoff and Ahlquist in August about everything from ERB’s humble beginnings to the most important thing they keep in mind when creating content. When we asked them to come up with an on-the-spot freestyle rap featuring famous entrepreneurs -- Elon Musk or Mark Zuckerberg, for example -- they laughed and told us to wait for their next big thing. Looks like we may be a little psychic.

Watch thetwo charactersbattle it out below.